There are situations where users are stuck with a version of Windows Live Messenger on their computer system that they cannot uninstall or update. This might have been caused by data corruption, a computer virus or other malicious software or the deletion of files or configuration entries. Manual removal is usually a solution but it requires lots of time with the danger of deleting data that is still needed on the system.

There are a few programs that can completely remove Windows Live Messenger from a computer system. These programs work in a similar fashion like the antivirus software removers that remove files and Registry entries from installed antivirus solutions from the computers system.

Here are the programs that can completely remove Windows Live Messenger:

Zap Messenger is a portable software program for the Windows operating system. It can not only uninstall Windows Live Messenger but also MSN Messenger and Windows Messenger 5.x. Zap Messenger requires the Microsoft .net Framework 2.0.

With all this in mind, I developed ZapMessenger â€“ the one step tool to completely remove Windows Live Messenger, MSN Messenger and Windows Messenger 5.x. The first thing ZapMessenger will do is attempt to cleanly uninstall Messenger normally and if that fails for any reason, it will forcibly remove Messenger from the Windows Installer engine allowing you to reinstall at your leisure without hindrance. 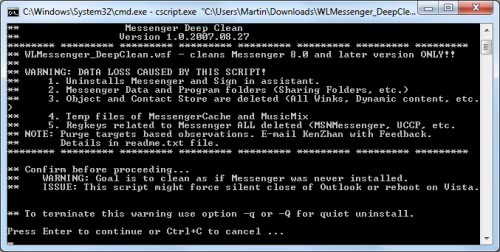 Update: Third program is no longer available, we have removed the link pointing to its download location.