Update: Google has retired its Wave service. You can read more about the retirement here. This means however that the Firefox add-on for Google Wave is of no use anymore since the service itself is no longer available.

Google Wave is a new service by Google that is currently tested in a limited preview. Google Wave invites are in high demand as anyone and their mum are trying to get in to the service that is said to "change the way we communicate".

Google Wave is basically a real-time communication platform, a mashup of email, instant messaging, chat rooms with project management features thrown into the mix. If you are already in you might find the following add-on for the Firefox web browser quite handy.

The Google Wave add-on for Firefox informs you when new messages arrive in the service. It works like any other notification add-on and tool available on the Internet these days.

Before you can make use of it, you need to link it to your Google account which you can do in the add-on settings.

Those who do will from then on be notified of new Google Wave messages in Firefox. The add-on places an icon in the Firefox status bar that displays the number of unread messages with the ability to hover over the icon to see previews of the messages. 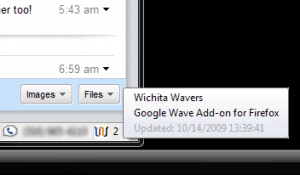 The Google Wave add-on for Firefox is available at the Mozilla Firefox website. The add-on is compatible with Firefox 3.5.x only at the moment.

Update: Google has stopped the development of Google Wave, and the Firefox add-on has been pulled as a consequence.