Microsoft WebsiteSpark is a new program by Microsoft that is offering small web development companies the opportunity to join the program for free to receive web development software and server software coupled with support, training and business opportunities. Web design companies with less than 10 members are eligible to join the program for up to three years at no costs except for a $100 exit fee. There are a few responsibilities for the web design companies including creating and maintaining a web profile at the Microsoft WebsiteSpark website and creating (and reporting) at least one website using the tools offered in the program in the first six months.

Webmasters and designers who are interested in joining the program can visit the Microsoft WebsiteSpark website to do so. The website offers a pdf document with detailed information on the program. It is probably a good idea to read thoroughly through it to get a better understanding of the requirements and responsibilities. 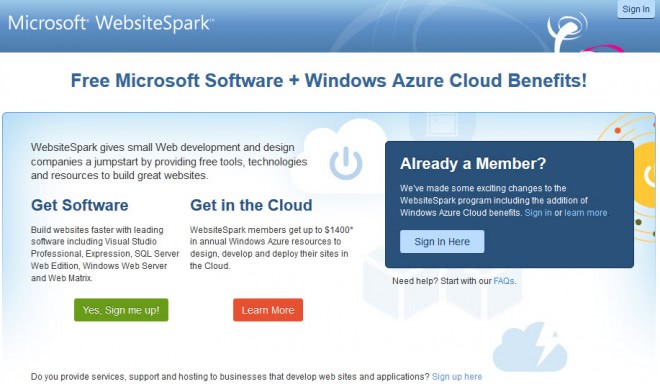 Microsoft WebsiteSpark can be beneficial to web design companies who are already using Microsoft software as they get the latest editions for free for the period of three years and do not have to make the switch from other software products. It could on the other hand be a good incentive for companies who would like to expand their services to include Microsoft services in their portfolio if they are not offering them already.