We have mentioned Comodo Backup before in our backup software overview for the Windows operating system. The backup software has taken a step forward since then with version 2 available for public download. The interface, functionality and compatibility of Comodo Backup has changed in this version. It is now for instance compatible with 32-bit and 64-bit editions of the Windows 7 operating system.

The interface looks well designed and it is obvious that the program has been designed with usability in mind. Users can select one of the quick backup options in the left sidebar (backup entire Registry, backup system partition or backup user settings) or select a backup source from the main pane instead. These include options to backup mail accounts, the system state, disk, partitions and the MBR, full or custom Registry keys or files and directories. 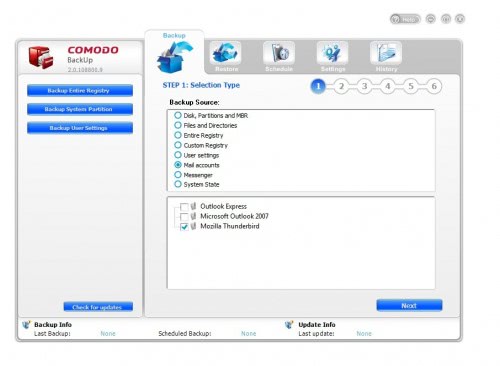 A selection screen will be displayed depending on the choice that the user made. The user can for example select specific Registry keys or desktop email clients when selecting the custom Registry or Mail accounts backup option from the interface.

It is possible to select multiple options of a specific backup source but not multiple backup sources. That's a bit unfortunate as it potentially means that several backup jobs need to be configured to create all desired backups.

Backups are divided into six steps that can be easily followed.

The history pane will detail all backups that have been created with Comodo Backup with options to restore or delete these backups right from within that pane. It is furthermore possible to restore backups using the restore pane. This might be handy if backups need to be restored that have not been created on that computer system.

Comodo Backup is an easy to use backup software for the Windows operating system. It offers a clean interface and most functionality that users would expect from a backup software. It would have been nice if users could define a backup that would include several backup sources at once. Another interesting option would be to be able to add backup shortcuts to the sidebar so that the first few steps of the process can be skipped.

Comodo Backup is available for most 32-bit and 64-bit editions of Microsoft Windows including Windows Vista, Windows Server 2008 and Windows 7.