Signo is a flexible hotkey manager from the developer of Minimem. It comes with a huge range of predefined hotkeys with the option to add custom hotkeys or to edit or delete existing ones. The hotkeys are divided into different categories that make it easier to manage the different subsets. Categories include computer memory, text, open, launch, windows and capture. Most of the hotkeys in these categories should be self explanatory. Hotkeys in the open category for instance can launch files on the local drive or open websites on the Internet while the windows actions provide access to hotkeys that manipulate windows and other screen elements.

Here is a short overview: 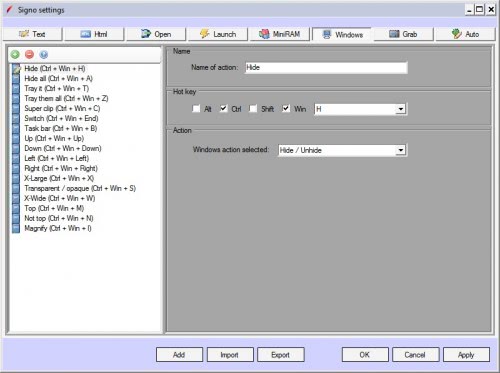 Signo will add an icon to the Windows system tray after startup. A right-click on that icon will display the list of available hotkeys and associated commands. These can be executed by clicking on them or by pressing the hotkey that is associated with the command. The same context menu provides access to the hotkey configuration which can be used to add, edit or delete hotkeys. Some of the interesting hotkeys that can be created include hotkeys to replace text entered by the user automatically into other text or html. It is for example possible to replace the text #s whenever it is written with a signature which could come in handy when writing emails.

Some available actions have been taken from the developer's other application Minimem. Hotkeys are provided to reduce the memory usage of the running web browser processes or all system processes.
Signo offers much and could be a great hotkey manager for many users. The downside is the rather high computer memory usage of about ten Megabytes in its minimized stage and that it requires the Microsoft .net Framework 2.0 which some users might not like at all. Everyone else can download Signo from the developer's website.