Batchrun is a free program that assists you in the creation of batch files on computer systems running Windows.

Windows batch files seem to be a thing of the past for the majority of today's users. Only some IT guys and those with the preserved knowledge on how to create them use batch files to automate some tasks on the operating system.

The majority of Windows users does not probably even know how to create batch files anymore. This is where the batch file creation software Batchrun comes into play. It is provided as an installer and as a portable application which function exactly the same.

Batchrun is a batch creation program with a graphical user interface which you may use to create and manage batch files.

A graphical user interface that would require knowledge about commands and structure would still only appeal to a relatively small audience. Batchrun however ships with commands and switches that you may add to your script without deeper knowledge of how they work or the proper syntax of a command. 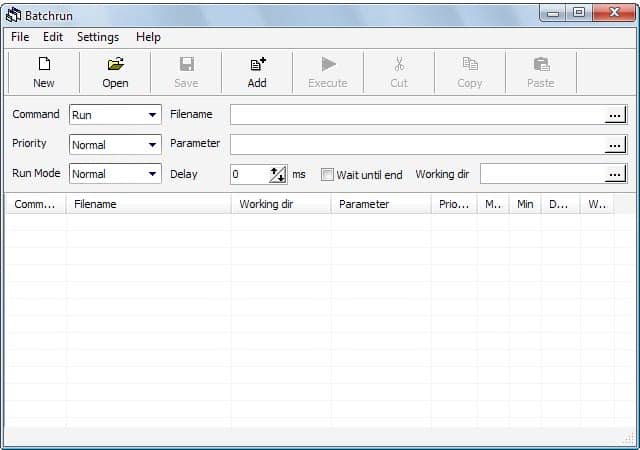 You can hit the new button in the interface to crate a new batch file from scratch, or open to load an existing one instead.

Once you have made the decision, you may add supported commands to the batch file. One of the shortcomings of the application is that it does not support all commands supported by Windows.

Each command has to be associated with a filename or name, and several optional components including parameters, execution delays, working directories, run modes or priorities.

Drag and drop is supported between Windows Explorer and Batchrun to select files more easily from the computer system. As soon as the first command has been added to the program it can be tested by executing it from within the interface.

Batchrun will display a progress bar that gives the user a indication of the execution process. The batch files can be saved directly to the computer system and even the Windows startup process. They are however not saved as .bat files but as .brs files which can only be executed by the Batchrun software.

Batchrun is a handy program for Windows that you can run on all recent versions of the Microsoft Windows operating system. While somewhat limited in its scope, it may still prove useful to Windows users who want to make use of the functionality it provides.

Update: Batchrun's web address has changed, and we have changed the link accordingly. The program is now compatible with all recent 32-bit and 64-bit editions of Windows XP, Windows Vista and windows 7.