Radiosure is a free program for Microsoft Windows that you may use to play and record Internet Radio on devices that run Windows.

Most music players are capable of playing Internet Radio without installation of add-ons; All that is needed to start listening to Internet radio is the url of the radio station. Radiosure is a radio music player that ships with thousands of built-in stations that you can tune in with the click of the mouse.

While experienced users access websites like Shoutcast directly to load radio stations in software music players, inexperienced users may like the idea of an all-in-one application that starts playing music instantly and that makes the selection of music stations easier. 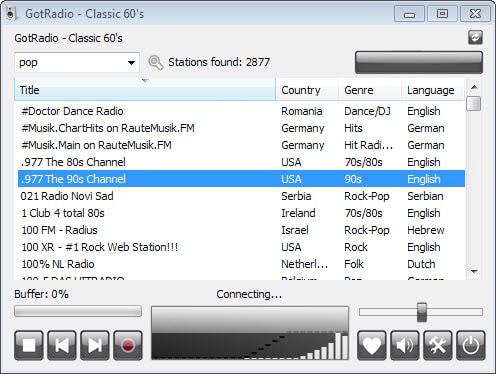 The music player lists more than 17000 Internet radio stations in its interface which can be listened to with the click of the mouse button. All stations are listed by name, country, genre and language with the option to sort and filter by any of the parameters.

The search helps you find stations of interest, for instance by entering a genre you are interested in, or a station name if you have a favorite one.

All results are displayed in the programs interface, and to make things easier the next time, you can add stations to the favorites with a click on the heart symbol. Here you can access them directly at any time to play them without having to use search to find them first.

When you start playing a station it displays the quality of the stream at the top as well. In addition to that, it may also display a cover or picture of the band or artist on the screen which you can disable with a right-click.

The only other feature worth mentioning is the record button which can be used to record the current stream to the local computer. Recordings will automatically be split by track if supported by the stream, and an option exists to skip already recorded tracks. The functionality is however not as advanced as that of specialized tools like Streamripper or Stationripper.

You can set the recording directory in the options. Other options available here include hotkey support to control playback and switch stations, and a skin manager to change the applications design by installing skins.

A portable and installer version of Radiosure is available at the developer's homepage. The program is compatible with both 32-bit and 64-bit editions of Windows Vista and Windows XP.

If you are looking for a radio player with recording capabilities, then RadioSure is definitely one that you may want to check out. While it lacks some features, such as displaying a station's streaming quality before you tune in or options to record multiple stations at once, it is an excellent program for anyone who wants better Internet radio manageability.