Run an airline, train, road and shipping firm with OpenTTD

OpenTTD is an open-source, cross-platform clone of the 1995 classic 'Transport Tycoon Deluxe'. The simulation game allows you to run a transport company from its humble beginnings to becoming a global player. In order to do so, you connect resources with factories, and cities with each other and so on.

As the name suggests, one of your main tasks in the game is to move resources around. You have to move people between cities and move goods like oil and coal between the relevant industry. This probably sounds easy at first, but since you have a lot of options and many menu items, it requires some time before you realize how powerful the game actually is.

The game requires the user to have a copy of Transport Tycoon Deluxe, as it relies on that game's data for graphic files. Update: No longer, it can download a graphics package from the Internet if none is found and uses that instead. So, you don't need the original game anymore to play OpenTTD.

The game is highly extensible and users can modify vehicles, add and make maps (some available ones are real-life, such as one of the Boston metropolitan area or of the UK) and add new types of vehicles. These modifications and maps are available on the OpenTTD Forum.

The default vehicles are planes, helicopters, hovercraft, ships, trucks, buses, railways, electric railways, monorail and MagLev train. The vehicles available, and the models of them, vary as the game progresses – you obviously can't have a supersonic jet in 1950! 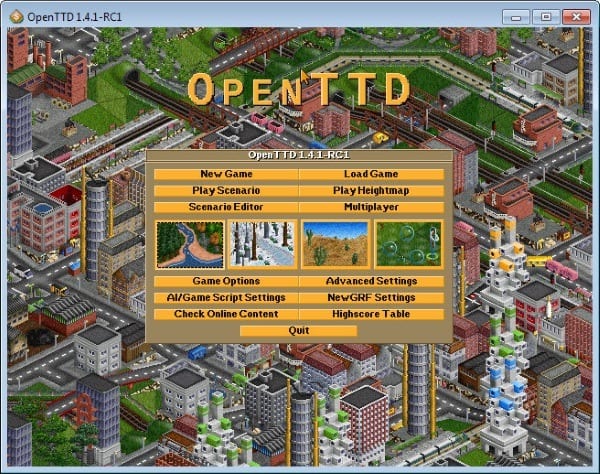 The first thing that you may want to do is check out the tutorial of the game here as it walks you through key game concepts  which you need to understand to get started. Even if you played Transport Tycoon Deluxe a long time ago, you better go through the tutorial to understand the core concepts before you try playing a scenario, or even multiplayer.

While you can use trial and error instead, it is likely that this will be a very frustrating experience even if you have played Transport Tycoon in the past.

The tutorial offers instructions for all sorts of things, from setting up bus and train services to road construction and landscaping. You can also check out the extensive game manual if you want even more information.

OpenTTD can also be played multiplayer over a LAN or Internet. This is a nice thing to play with a friend whilst bored.

The game isn't very challenging; you can easily go from a balance of -€200,000 to hundreds of millions in green figures in about 50 in-game years. Yet, it remains fun. Online gaming is much more challenging.

It can be played on all major operating systems and developmental ports exist for portable devices like PocketPCs and Nintendo DSs!