While I'm overall pretty happy with the purchase of the OCZ Core Series II SATA Solid State Drive some disadvantages do come to light every now and then. This happens in situations where many small blocks are written on the Solid State Drive leading to an unresponsive system for a few seconds. This thankfully does not happen to often and the benefits, especially the fast application load time are incredible experiences. Up til now the fastest conventional platter driven hard drives like the Western Digital Velociraptor were able to match the speed of the SSDs in most areas at a more competitive price.

A recent review of the OCZ Vertex Series 120GB SSD might be a turning point though as it is one of the first Solid State Drives that leaves even the fastest platter driven hard drives behind in both benchmarks but also real life tests. Benchmarks are great to compare speeds but the situation can be different under real life circumstances. CD Freaks have posted an extensive test of the OCZ Vertex Series 120GB SSD and compare it to other platter driven hard drives like Samsung's Spinpoint F1 or Seagate's Barracuda 7200.10.

The results are astounding: The OCZ Vertex Series 120GB SSD booted Windows Vista to the Welcome Screen in 11.54, install Vista SP1 in 16.12 minutes compared to roughly 40 minutes for all other tested hard drives, performed a Microsoft Office installation in 2.13 seconds compared to 3.43 minutes for the second place finisher or 24052 points in PCMark Vantage HDD suite result while the platter driven hard drives managed scores around the 4000 mark. 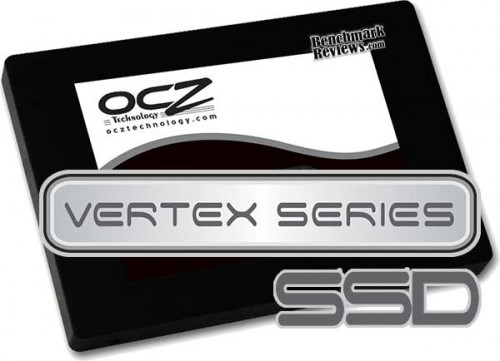 The conclusion of the reviewer is absolutely positive:

The OCZ Technology Vertex series drives are quite incredible. This is the first SSD drive I can honestly say is completely stable when used as a system drive. It's also incredibly fast.

Reading access times are lightning fast and applications load in an instant, making the Vertex series of drives ideal as the operating system drive with all the userâ€™s installed applications.

The new OCZ Vertex solid state drive is one of the most impressive SSDs we have tested to date. I know that there is much excitement in the hardware community about this drive and for good reason: it uses a brand new controller from a brand new company and as such performance was an unknown. Many in the community have been billing it as the first true competitor to Intel's X25-M line of mainstream MLC drives and it indeed lives up to that status.

Based on the collection of benchmark performance tests we've conducted, the OCZ Vertex offers linear bandwidth so far ahead of previous competition that it might require calling this a new generation product in order to justify how so many other 'new' products have just been left behind. The MLC Samsung flash modules paired to a 64MB cache buffer on this 120GB Vertex SSD help yield a 0.10 ms response time. ATTO Disk Benchmark tool reported an impressive 249 MBps maximum read bandwidth in our tests, but only 138 MBps maximum write. HD Tach recorded additional high-performance results, with approximate bandwidth speeds reaching 236.6 MBps read and 162.6 MBps write. EVEREST's linear full-sector bandwidth performance was a steady 247.6 MBps read-from, and an impressive 225.2 MBps write-to speed.