There is definitely no shortage of programs when it comes to mounting CD or DVD images on Windows machines.

Microsoft plans to integrate the functionality, at least for ISO disc images, in the company's Windows 7 operating system. It has been built-in KDE on Linux for years already, and we have covered quite a few tools in the past that you may use to mount iso images.

Note: Gizmo Drive's last update dates back to 2011. The developer website suggests it is compatible with Windows 7 and older versions of Windows. The program should run fine on newer versions of Windows as well. We suggest you use ImgDrive, or other disk mounting programs that are still updated regularly. 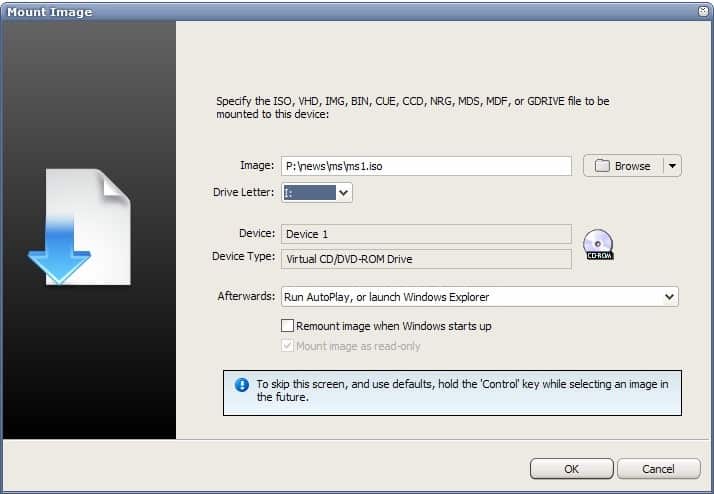 Gizmo Drive is yet another tool to mount CD and DVD images on systems running Windows. It can mount ISO, BIN, CUE, MDS, MDF, NRG and VHD images;essentially the most popular image formats. Images can be mounted using the shell in Windows Explorer, the command line or the graphical user interface.

You can right-click an ISO image for instance in Windows Explorer to mount it directly from the default file manager.

Gizmo Drive can mount as many CD, ISO or Virtual Hard Drive images as there are free drive letters available. Each image can be remounted during Windows Startup, or write protected so that the data does not get changed.

It is also possible to create new ISO images with some interesting features besides the option to mount all popular disc image formats.

The drive mounting software has a surprisingly low resource usage when minimized in the Windows System Tray with less than four Megabytes of computer memory total. Make sure you only check the GDrive option during setup unless you want to install other programs as well.

Gizmo Drive is a powerful disc mounting software program for Windows that supports other features, such as the ability to create virtual hard drives in RAM on top of that. Its resource usage is low, and functionality immense.

The only downside is that the program has not been updated in years.