After downloading and installing RSS Popper a new toolbar appears in Microsoft Outlook. The toolbar contains one pulldown menu with the options to edit feeds and configure the options of the Microsoft Outlook add-in. It does contain two switches that can be used to turn RSS delivery on or off and to Refresh the RSS items.

The RSS news items are displayed under the RSS folder in the Mail Folders panel. This is similar to the way how Microsoft Outlook 2007 handles RSS news feeds.

RSS Popper comes with a few general RSS news items installed but one of the main reasons to use it is to add your own RSS feeds to the program. 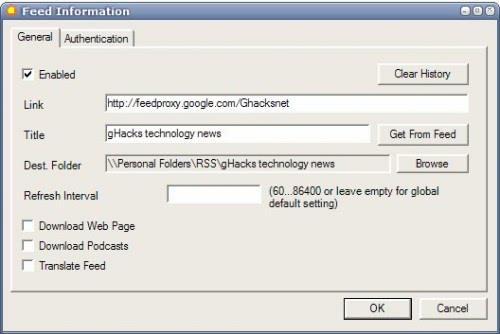 RSS Popper supports RSS / Atom feeds, iCalendar items, Bloglines and Newsgator accounts. Interesting options include the function to translate a feed or to use authentication.

Update: RSS Popper is not compatible with newer versions of Microsoft Outlook, at least not according to the program website which does not appear to have been updated in the last few years.

I'd highly recommend to use a standalone feed reader to read RSS feeds that you stumble upon. My current favorite is Great News, a lightweight program for Windows that has no dependencies.

Thunderbird 91 is available as a manual upgrade

Previous Post: « Display Timezones In Thunderbird
Next Post: « Are You Up For An Email Client With Unique Features? Read On!