You might remember that I switched from web based rss readers to desktop rss readers some time ago. Reasons for that switch where manifold including performance issues but also security concerns. FeedDemon was the desktop rss news reader of choice after trying out several available one that got recommended by users. FeedDemon is still the epitome of a desktop rss reader. It combines a good performance with interface customizations and interesting functions like filters that can be created to catch keywords or reports.

GreatNews is another desktop rss reader that comes with all the features one would expect from a rss reader. It can import opml feeds which is a standard XML format that contains feed information. Basically any feed reader can export and import opml files. The first thing that observant users will notice is the low resource usage. A direct comparison between FeedDemon and GreatNews revealed that GreatNews was using between 10-20 Megabytes of computer memory less than FeedDemon did. (GreatNews uses about 3 Megabytes when minimized while FeedDemon uses more than 7 MB)

Resource usage is not everything on the other hand. Updating feeds in the rss reader seemed to be a bit faster than it was in FeedDemon as well. This might be caused by a subroutine of the desktop rss reader that automatically detects dead or feeds that have not been updated in a very long time giving the user the option to remove those feeds from the rss software. FeedDemon has a similar option as it displays feeds that are no longer working or have not been updated in a specific time as well. This is a manual process however. 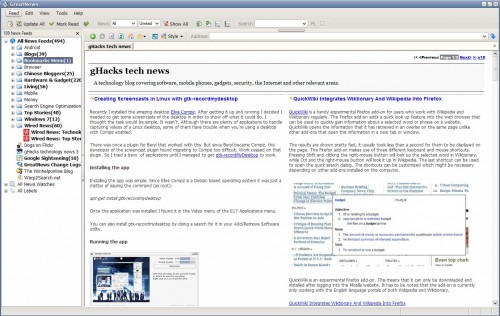 One of the more interesting features of GreatNews is the so called News Watches. This makes it possible to make the desktop rss reader search for keywords automatically in previously defined rss feeds. It is for example possible to search for the name "Bill Gates" in all subscribed rss news feeds, or for the term Linux only in the Ghacks feed. This is an excellent way to find keyword related news articles faster than usual.

Are there any disadvantages? The only thing that's not looking bright is support for the desktop rss reader. While the software developer is still active on the website he does not seem to have plans to update the software further except for a few necessary bug fixes. This is not a problem right now as everything in the news reader is working as intended and without complications. GreatNews as of now is an excellent alternative to FeedDemon.