If you are (manually) starting the same application on your mobile phone over and over again after powering it on you might be inclined to autostart the application instead to speed up that process and reduce the time it takes to fiddle around with the phone's controls. Some applications where this might be useful are voice recorders, music players or wifi detectors.

Powerboot might be just the application you have been looking for. It is compatible to a variety of mobile phones. Lots of Nokie phones like the popular N73, N95 or N96 are on the list of supported phones but you also find many Samsung and a few other mobile phone brands on the list.

The application works in principle like the Windows startup folder. The mobile phone owner selects applications that he wants to autostart and enables Powerboot afterwards. The selected applications will then be automatically started when the phone is turned on. 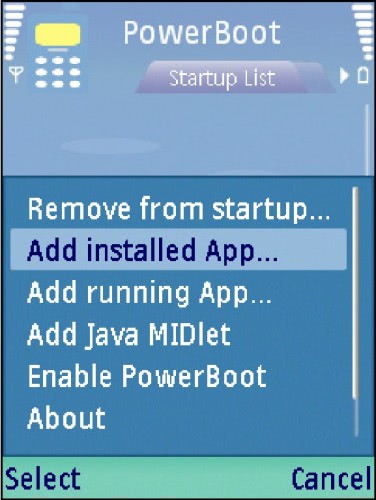 The application works well with Symbian-based phones mostly, but not with Apple iOS or Google Android phones. Google Android users on the other hand can install a program such as Startup Manager which can be used to enable or disable startup items for Android based smartphones. The app is compatible with Android 2.2 or higher phones and one of the most popular apps of its kind for the phone.

I'm not aware of a comparable app for Apple's iOS operating system.

Android 12 could be launched on October 4th