The Windows operating system lacks several basic options when you work with program windows on it. There is for instance no option to set windows to be always on top if they do not provide you with that functionality natively. There is also no option to force programs to minimize to the Windows System Tray (unless supported again), or set the transparency level of open windows.

The latter has been introduced in Windows Vista but previous releases of Windows do not support that feature at all.

It is however almost certain that software developers have created an application with the exact functionality needed. In this case Power Menu was developed which is a lightweight software program that adds the option to minimize a window, to set windows to be always on top and to set the transparency level of each window individually.

Power Menu adds the three options to the right-click menu when clicking window titles. This works when the window is visible on the screen but also when it is minimized in the task bar. 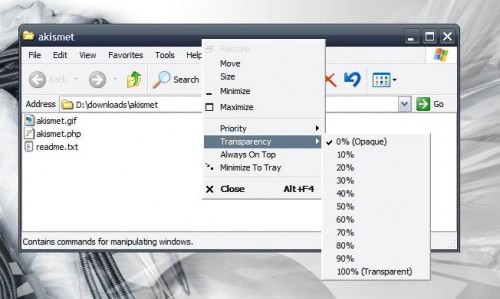 Power Menu can be run on all 32-bit editions of Windows from Windows 9x to Windows Vista.

The application ships with a fourth option that you may find useful. You can use it to change a program's priority on the operating system. This changes how much resources windows uses to run it, which can be very useful if you are running performance intensive programs on your system, such as video or audio editing software, games, or other applications that benefit from additional resources.

All you need to do for the functionality is to right-click the window, select priority from the context menu that opens all available process priority options.

The program has not been updated to support newer versions of the Windows operating system. While that does not mean that it is not compatible, it is probably better to select a different program if you are running those Windows versions instead.

As far as process priority is concerned, you can try out the excellent Process Lasso application.