The only game that I'm playing regularly for a while now is Team Fortress 2 on Steam. Most games from Valve support so called spray logos which can be sprayed by the player in the game. The game ships with a few default ones which are kinda boring because every player in the game is using them. Custom spray logos are the way to go for the extravagant Team Fortress 2 player and this little tutorial explains the creation process.

The process should work on other Valve games like Counterstrike Source as well. The requirements are a picture with a resolution of 256x256. That's the biggest possible logo size, it is possible to use a smaller size like 128x128 or 64x64 but 256x256 seems to work best in most cases. The only other requirement is a software program called VTFedit which turns the image into a file format that can be imported into the game.

It is a good idea to start by preparing a few images that you want to turn into Team Fortress 2 sprays. Start VTFedit and File > import one of the images that you have created. Importing an image loads the VTF Options screens automatically. The only parameters that need to be changed during first usage are the Texture Type which has to be set to Volume Texture. The other parameters are optional, you do get good results if you use the same settings that are shown in the screenshot. A click on OK creates the new texture. 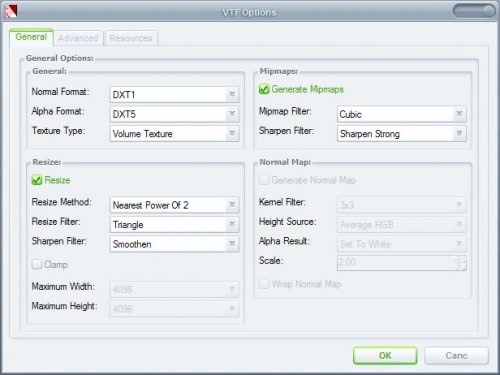 Now select File > Save As from the top menu and save the newly created file in the Steam \steamapps \username \team fortress 2 \tf \materials \VGUI \logos folder. You might need to create the VGUI and logos folder if they do not exist.

The last step is to import the Team Fortress 2 sprays in game which can be done in the options.