The Jelly effects are more unusual and harder to figure out. Activating Windows Bounce will bounce every window the user clicks on which did cause troubles with the Windows Start Menu on the test computer. Windows Resilence makes Windows act like jelly during resize while Window Kinetics adds basic kinetics to windows movement. 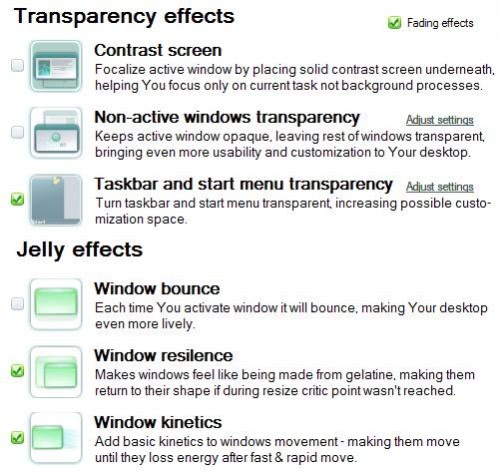 The program has a few quirks which can be attributed to the early version. The transparent windows effects work fine and without problems. The Window Resilence and Window Kinetics Jelly effects would not work on the test computer. That, or they were not recognizable. Windows Bounce was working but pretty annoying after a short while.

The best feature so far is the Contrast Screen option which makes it easier to work in Windows. The software program uses roughly 20 Megabytes of computer memory and users who only want the transparency effects are probably better off with an application that demands less system resources like Chaos Crystal.