If you live and breath Flickr you might find the following tools to integrate Flickr into Microsoft Word 2007, Microsoft Outlook 2007 and Windows Live Writer useful. The tools (via Genbeta) are currently limited to those three versions, previous Microsoft Office editions are unfortunately not supported (yet).

All three tools function as plugins, or add-ins, and integrate Flickr access, or more specifically the option to integrate Flickr images into Microsoft Word, Outlook or Live Writer. Supported are not only photos that have been uploaded by the user who wants to integrate them but also from other Flickr users.

A search and filters are provided in all three applications. It is for example possible to filter images by uploader, by size and search by photoset or tags. 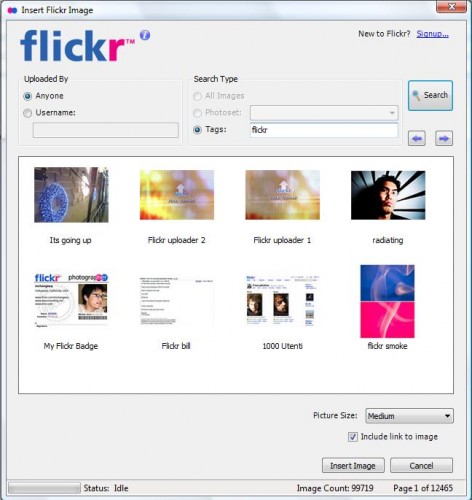 If you like the idea head over to Flickr4Word, Flickr4Outlook and Flickr4Writer to download the plugins. The option to access the plugin is available directly from the toolbar. A button Flickr Image appears after installing the plugin in the selected Office program.

Update: The Flickr for Word and Outlook tools have not been updated since 2006. Both do not work anymore with current versions of Outlook or Flickr, and we have removed the download links to these programs as a consequence from the article.

The Live Writer plugin for Flickr on the other hand has been updated, and while its last update dates back to 2009, it seems to still work just fine.

The lack of updates on the other hand suggests that it will eventually fail to work with newer versions of Flickr or Live Writer, so keep that in mind when you try it out on your system.