Create Outlook Tasks From The Command Line And Launchy

Gianluigi sent me an interesting email just a few minutes ago that described a small script that he wrote that allows you to create Outlook tasks from the command line and Launchy. The real benefit of this approach is speed and it can be especially handy for those of you who do use Launchy because it's just another tad easier then instead of using the command line.

The script can be downloaded from Gianluigi's website, just take note that it requires the Microsoft .net Framework 2 or higher to function properly. Runs perfectly on Windows XP Service Pack 3 and Windows Vista Service Pack 1 according to the author. The website is in Italian but Google Translate does a good job at translating the website into English.

The option to create Outlook Tasks from the command line is given after script installation. Just fire up the Windows run box (Windows R) and enter any new tasks beginning with "do". The command "do buy some beer" would add the buy some beer task to Microsoft Outlook which does not even have to be running to add the tasks. 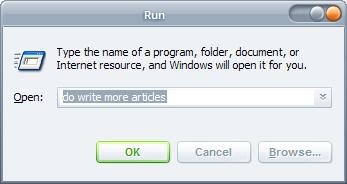 The application can also be added as a Runner plugin to Launchy. Just add the executable to the list of plugins in Launchy and you can from now on use the "do Tab task" command to add tasks to Microsoft Outlook. Definitely more convenient than the command line, especially if you use Launchy all the time.

This goes very well along with DeskTask, a program that displays Outlook's calendar and tasks list on the desktop. You basically have all of your tasks accessible on the desktop at all times, even if Outlook is not open.

Update: I can't say if the program is compatible with newer versions of Outlook. I suggest you give it a try and see if the tasks are added to Outlook when you run the command.

Martin Brinkmann is a journalist from Germany who founded Ghacks Technology News Back in 2005. He is passionate about all things tech and knows the Internet and computers like the back of his hand. You can follow Martin on Facebook or Twitter
View all posts by Martin Brinkmann →
Previous Post: « Automatically Scan, Convert and Burn Multi-Page Papers
Next Post: Hydra IRC Client »