You might know that I'm not a huge fan of Instant Messengers and their online pendants like Twitter. I check them out frequently but never found a reason to use them extensively even though some of my friends are using them. ICQ was probably one of the first Instant Messengers I heard about back in the days when I started using the Internet regularly.

There was not much choice in those days either with only a few clients to choose from and ICQ was very popular then. I'm not sure how this has changed but I assume that users are preferring those multi network clients instead nowadays.

ICQ 6 is the latest version of ICQ and it displays advertisement and toolbars that can be removed quite easily. The application ICQ 6 Banner Remover can remove the advertisements and the toolbars from ICQ. 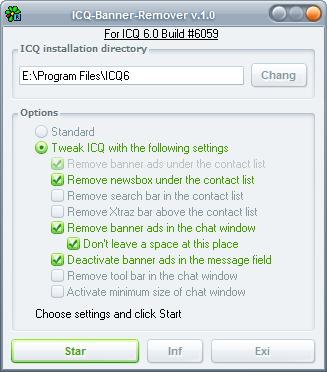 The correct build number of ICQ 6 has to be known to be able to apply the patch to the application. Click on Main > Help > About ICQ to display the build number. Now head over to the Murb website and download the ICQ Banner Remover that can be applied to that build number.

Several tweaks are automatically selected in the application. A click on the Start button removes the elements from ICQ. Make sure that ICQ is closed before applying the patch.