Pimp your MSN Messenger with HiYo

I'm not using Instant Messengers and also do not use the Web 2.0 equivalent in the form of Twitter and comparable services. That's something that stuck with me since I began using the Internet in the early 90's and I never changed my stance on the subject. Instant Messengers are nevertheless highly popular and Everton came up with a nice addition for MSN Messenger.

One of the reasons why I never bothered to use Instant Messengers was the "spammy" connotation of them. There have been many services on the Internet that offered add-ons, smileys and other gimmicks for Instant Messengers that turned out to infect the user's computer with malicious software or use the information entered by the user to spam him into oblivion.

HiYo seems to be different. The add-on for MSN Messenger comes without adware, spyware and other malicious software. It adds a new toolbar to the compose window that provides access to new content that can be added to posts like images and animations. 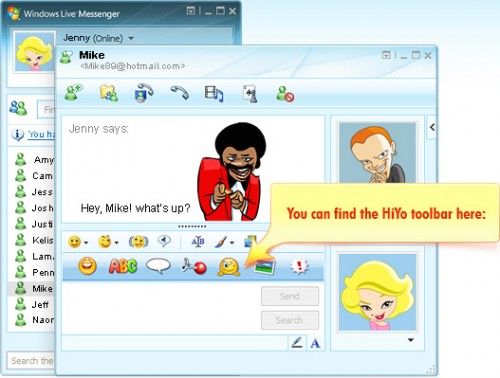 One interesting aspect is that content gets suggested by HiYo which is great for the flow of conversation because it does not usually take ages to find the right image for the current situation.