The location bar, also dubbed awesome bar, has already created some controversy among Firefox users. A group of Firefox users does not like the fact that bookmarks are displayed as suggestions when you type text into the address bar.

They would like to see a preference setting that enables the old location bar behavior instead (Update: This has been fixed in recent versions of the browser. You can now decided what is being suggested by the browser when you start typing).

Adding to that is an error in functionality in my opinion. Correcting typos in the middle or at the beginning of a phrase does not refresh the search results immediately.

You can try that out for yourself by typing in Mozzilla in the location bar and delete the second z after typing that phrase. 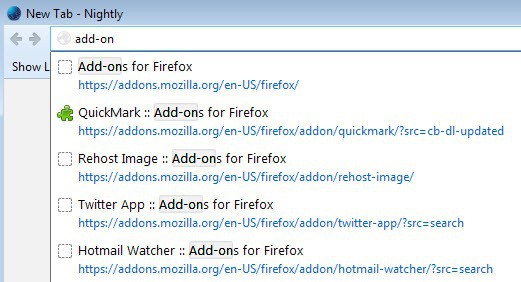 Update: The Firefox add-on Edit Middle is no longer required. It is not compatible with newer versions of the web browser, and the core reason for that is that Mozilla has improved when the suggestions are triggered.

Basically what is happening now is that adding, removing or editing any character in the location bar will trigger a refresh of the results.

So, no matter if you edit a typo that you have made or add a word or phrase at the beginning, the list of suggestions will be automatically updated to reflect that change.

Martin Brinkmann is a journalist from Germany who founded Ghacks Technology News Back in 2005. He is passionate about all things tech and knows the Internet and computers like the back of his hand. You can follow Martin on Facebook or Twitter
View all posts by Martin Brinkmann →
Previous Post: « 5 Essential Firefox 3 Add-ons
Next Post: Disable Bookmarks in the Firefox 3 Awesome Bar »