How to export live bookmarks in Firefox

After I realized that the Brief Firefox add-on was - at least partially - responsible for the high cpu and disk usage of Firefox every 45-60 minutes I had to find another way to read RSS Feed.

I uninstalled the Brief add-on and did face the problem that I had to export all Firefox Live Bookmarks as this was what Brief used to display and update feeds.

Update: While the article refers to Firefox 3, the same method works in all recent versions of the web browser as well.

There was unfortunately no option in Firefox 3 to do that. I was able to export all bookmarks to html and json format but that did not help me as Feed Readers were only supporting the OPML format.

If you cannot find an option in Firefox you can be very sure that some add-on developer has already developed a solution.

In this case it's the OPML Support add-on which adds the option to import and export opml files directly to Firefox.

OPML files contain the RSS Feed information and can be imported into virtually any RSS Feed reader. It can export Live Bookmarks, regardless of whether they have been used by a feed reader like Brief or directly in the browser. 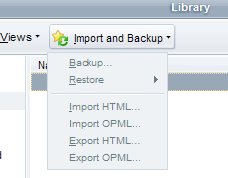 The two new options are added to the Bookmark Manager which you can open with the keyboard shortcut Ctrl-Shift-b.

Both are available under the Import and Export menu. It takes some time to export the Live Bookmarks and Firefox will not be responsive during that time.

The result is an opml file on the local drive that you can import into most feed reading services and desktop applications.

It is naturally also possible to use the extension to import an opml file into the Firefox browser if you want to use one of the available feed reading extensions or the browser's own Live Bookmarks capabilities for that.