Capivara is a Java Open Source file manager that supports the FTP and SFTP protocols plus direct file synchronization. It does not have the massive functionality of a software like WinSCP, which by the way supports file synchronization as well. One advantage of Capivara is that it was programmed in Java which means that it can be run on different operating systems such as Linux, Windows and Apple Macintosh.

The main features that make it stand out are tabbed browsing, synchronization and the duplicate finder. Tabbed browsing is definitely the easiest to explain. Two panes are by default displayed like in any other file manager. If I wanted to open another local or remote directory I would have to open a new WinSCP instance. Capivara makes use of tabs to avoid that several instances of the same application have to be opened.

A right-click on a tab opens a menu with the option to add another tab to that pane which can connect to local or remote servers. Synchronization is the next feature. As I said earlier this is also supported by WinSCP and many other clients but Capivara supports four different modes including SHA-1 and MD5 sync. 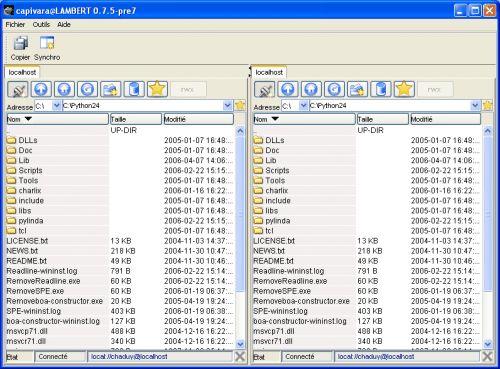 Before files are copied and deleted they are shown in a preview pane which displays all file operations. The last feature is the duplicate finder. It compares the files and folders that reside in two root directories giving the user the options to move or delete duplicate files.

Capivara has some shortcomings though. The local file system will only be displayed if the user presses the connect button and selects it from the menu. That's a bit complicated in my opinion. The right-click menu is not working everywhere. A user has to press a button to create a new directory while most are probably used to right-click the mouse to do so.