The major issue that I see with all those Web 2.0 social networking websites is that there is no central administration for all the sites that you are a member of but individual management dashboards for each website and service instead.

More sites are going live each day and it's a complete mess to keep up with your friends and make them your friends on those new sites as well.

While you could keep on using a single site, there always seem to be friends who like to try out new things which means that you will be left behind eventually.

The basic principle of Lockr is to give non-members access to your private content. Non-members are your friends who do not want to join that social networking site but still like to see the pictures that you upload to Flickr for instance. 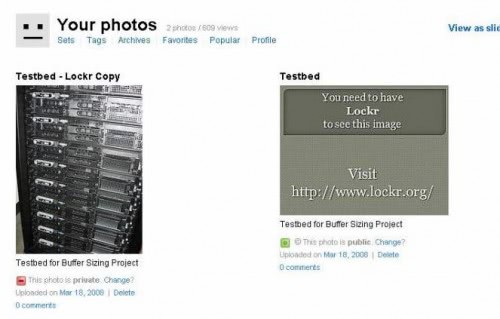 Since Lockr is a Facebook application your friends need to be member of Facebook but that's it. From there users can give permission to access private pages on other social networks. You need the Firefox add-on if you want to share private pictures with your friends on Flickr.

The next release will be Lockr for Bittorrent which adds Lockr to Azureus. I think that this is one service to look after in the coming months.

Update: Lockr appears to be no longer available. It is unclear what happened to the service, the most likely explanation is that it was not sustainable after all.

There does not seem to be a comparable service available at this point in time.