My first thought when I heard about the Eye-Fi Wireless SD Memory Card was that no one would be going to need this SD card with build in WiFi but when I read a little bit further my opinion changed from No-one-needs-that to Wow-what-a-great-idea. The Eye-Fi SD cards come in sizes of 1 and 2 Gigabytes, the 2 Gigabyte version sells currently at Amazon for $99.99 which is way more than a SD card without WiFi would cost.

WiFi is of course what makes this SD card stand out of the crowd. There has been some confusion on how this actually works out and I would like to explain the principle. The SD card can communicate with a computer or the Internet directly and upload pictures taken with the digital camera to those locations. This means that no computer is needed after the initial setup if you want to upload the pictures to sites on the Internet.

Many popular photo sharing and printing websites can be configured using a software that is supplied with the SD card. A USB memory card reader is included with every card which means that you can plug the card into a computer and manage it from there. (Login and password for those websites for instance are stored on the card) 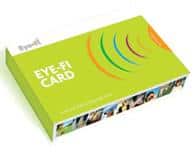 Supported are 40/104/128-bit WEP encryption, WPA-PSK, and WPA2-PSK encryptions and works with Windows XP, Windows Vista and Mac OS X. Only jpg images can be uploaded directly, images saved in other formats are currently not supported by the Eye-Fi SD card.

Martin Brinkmann is a journalist from Germany who founded Ghacks Technology News Back in 2005. He is passionate about all things tech and knows the Internet and computers like the back of his hand. You can follow Martin on Facebook or Twitter
View all posts by Martin Brinkmann →
Previous Post: « Goodbye BIOS Here Comes UEFI
Next Post: Monitor Calibration Wizard »