People use dozens of social news and bookmarking websites nowadays. All those sites offer toolbars and buttons for various browsers including Firefox, it's just too much if you want to install all of them. Webmasters are looking for ways to submit their sites and articles to those sites with less effort and without having to add lots of clutter to their web browser.

Shareaholic is a Firefox extension that adds one button to Firefox that can be used to submit the current url to various social bookmarking and news websites like Digg, Delicious, Facebook and Stumbleupon. Users need to right-click their toolbar after installation and select customize from the menu to add it there if it does not happen automatically.

A new window appears with buttons that can be added to the Firefox toolbar. Locate the Shareaholic button and drag and drop it into a place you are comfortable with. Once it is there it can be used with a simple click on its icon. 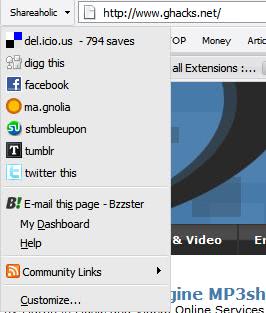 The extension can be customized as well. You can add or remove sites. A total of 13 websites are available and seven are activated by default. So, if you would not use Tumblr you could remove that and add Twitter instead. Here is a list of all sites available:

Pages can also be emailed using the Bzzster service. This requires a user account at that service though. Shareaholic has one more interesting feature that is worth noting, it's called Community Links. This lists the latest links that Shareaholic users have submitted to the various websites. A nice way to discover new websites.

Update: Shareaholic supports over 100 different social networking sites now which you can select with ease.