Pediaphon is a text to speech script that generates mp3 files from Wikipedia articles that you point it to. The article is download and processed by the script, and a mp3 file is created in the end that you can play in any media player or even directly in the web browser if you prefer that.

The voice is rather robotic but still understandable, even though it is clear that this is a computer generated voice and not read by a human being.

If that does not bother you, then you may find tha Pediaphon is an excellent application.You can use the application to create audiobooks of sorts from Wikipedia articles. Great if you want to listen to an article while you are on the go for example, or when you do other things on the computer that prevent you from reading the article.

The Pediaphon website offers several options. You can create a mp3 file directly from a keyword that you enter, and either download the file to your system once it has been created. or listen to it right from your browser.

Several languages are available, with English, German, French and Spanish being the main ones. It is suggested to pick the right language, unless you want to listen to articles read by a foreigner.

Different voices are available as well. You can switch between male and female voices for example, and also change the speaking speed from normal to fast or slow.

The process of converting them is pretty fast. It takes no more than a few seconds to create mp3 files from selected articles. A test article that created a ten minute mp3 file for example was ready for download after only a couple of seconds.

The only problem that you may run into while using the service is that you need to specify unique articles. If you do not, you get a "did you mean" page on Wikipedia which the program will then convert for you. 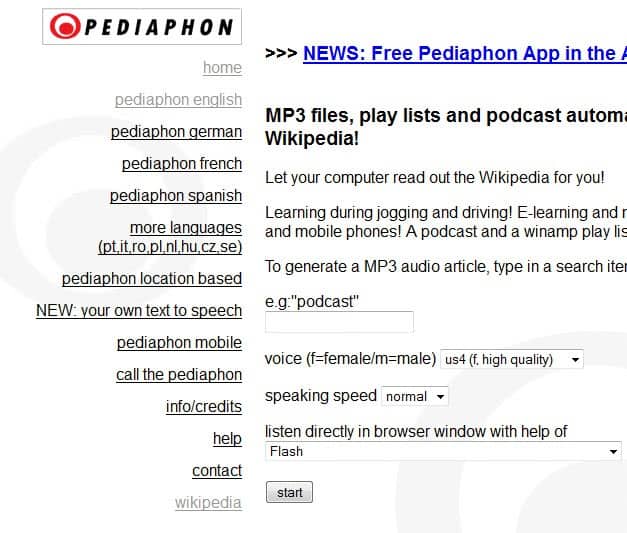 If you are in that situation you have to redefine the title to point to the correct Wikipedia page. Pediaphone offers WAP and Cell Phone access as well.

The latest version of the service supports Spanish and additional languages on top of the four languages that it supported from the very beginning.  To create a mp3 file from a Wikipedia article simply enter a search term, a title for instance on the site and wait until the mp3 has been generated. It takes a couple of seconds for that, but should not take a lot longer.

Update: The makers of Pediaphone have released an application for Android that you can download free of charge to install on an Android device.