Get rid of a huge programs list in the start menu - gHacks Tech News
ghacks.net

Get rid of a huge programs list in the start menu

I reviewed the software Tidy Start Menu the other day which offers users an option to move start menu entries to several categories like Office, Games and Internet to improve the manageability of all programs listed in the Windows start menu.

The main idea behind the program is to display categories in the start menu's root listing to improve accessibility of all programs listed in it.

It occurred to me that I did not need the program for that. The only advantage that it offered over manually moving programs into folder categories was that I did not have to create the folders that it creates manually.

I quickly uninstalled the software and decided to create a few main folders and move the majority of my applications into them. Only shortcuts to those applications that I would use on my daily routine would remain visible. I decided to stick with the main categories Office, Games, Internet, Utilities and Graphics.

Many startmenu entries have not only the shortcut to the program in their folder but also shortcuts to readme files, uninstallation routines, webpage links and the like. 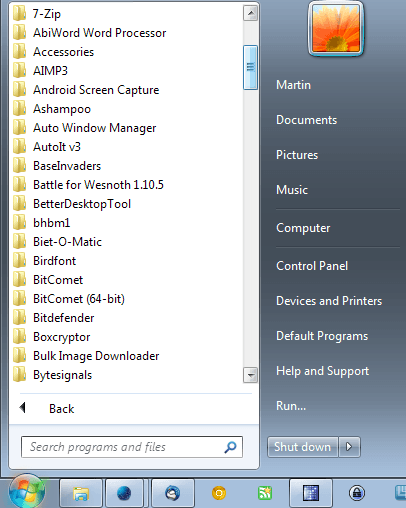 I always thought that this was superfluous and it made me occasionally miss the mark, so to speak. Instead of loading a program, I would open a readme file, or a website, or even start the uninstallation routine.

So, while I was at it I decided to remove all files except for the program shortcuts to avoid this in the future. This took a while, and I have to make sure that I move every new program that I install or move to the start menu to the right folder, but it is worth it in my opinion.. I have ten categories and only two application shortcuts underneath them.

How do you sort - if you do that - your startmenu ?

Update: The release of Windows 7 has turned things around for me quite a bit. The new taskbar of the operating system lets you pin programs you use often to it, so that you do not have to use the taskbar for that anymore.

The consequence for me was that I use the start menu less and the taskbar more frequently. That's the main reason why I no longer categorize programs into folders to make up room, as it is not required anymore to use the start menu to run the most important programs on the system.

Article Name
Get rid of a huge programs list in the start menu
Description
How to use categories in the Windows start menu to improve accessibility of programs listed in it.
Author
Martin Brinkmann
Advertisement

Previous Post: « Analyzing the svchost.exe processes
Next Post: Reveal the domain owner and hoster of a domain »