When a friend of mine enters Teamspeak I have to turn Internet Radio off to understand what the joined member is saying. I have found a way to do just that, turn off Internet Radio or any other music from my music player but leave the sound output levels of Windows as they are.

XMPlay does that. All that needs to be done is to set two global variables in XMPlay which can be done by right-clicking the music player and selecting Options % Stuff from the menu. Click on the shortcuts tab in the left window and add the new shortcuts that you like.

I did add two: Current Track - Stop and Current Track - Play / Pause. I used ALT CTRL M and ALT CTRL N repsectively and set both shortcuts to global. This is done by selecting the shortcut afterwards and checking the "Global' setting.

It is now possible to start and stop any music played in XMPlay in every other application in Windows. Even in games like Team Fortress 2. Very handy if you ask me.

Update: Recent versions of XMPlay come with keyboard shortcuts so that you can use the default shortcuts right away, or modify them if you prefer them to be mapped to other keys instead. 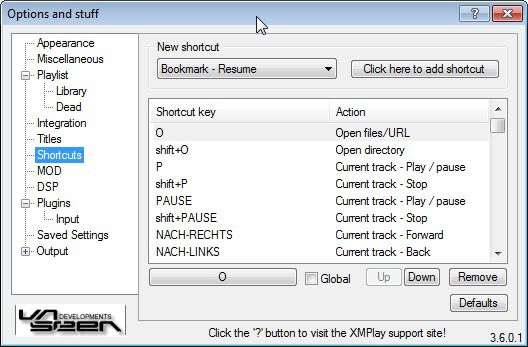 You need to click on the settings button, and there on Shortcuts to browse the available shortcuts. You can hit P to start and stop the playback.