Just a quick login into Gmail at work to see if I received any new mails. Oh, no. My Boss is coming. What now. Panic! If you experienced a situation like that, be it at work, school or even at home you wished for a feature to quickly hide all the open windows on your system so that any bystander won't notice what you have been up to lately.

Plancoin is a free program for Windows that can hide Windows for you. It is highly configurable, allowing you to either hide all windows but windows with a title you specify, or show all windows on execution but windows whose titles that you specify. The include option enables you to specify windows that you want to hide whenever you hit the hotkey, the exclude option windows that you want to show on the desktop while all others are hidden from sight when you tap on the key.

The program uses window titles to identify them which may or may not be problematic depending on the programs you run on the system. It is usually safer to use the exclude feature so that all windows but the once you explicitly specify are hidden on the desktop.

If you select the include option, you have to find generic names that are always displayed in the title of the window to make sure it is always included in the hiding. Finding generic titles is however often not as complicated as it may sound. The Firefox web browser for instance has always 'Mozilla Firefox' in the title. 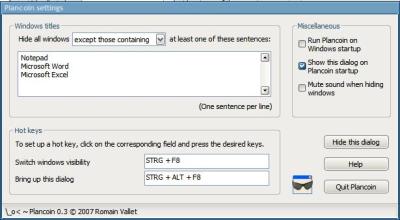 The hotkey to toggle the visibility of windows is Ctrl-F8 which you can change in the options if you prefer to use a different shortcut instead. You can also bring up the Plaincoin window with the Ctrl-Alt-F8 hotkey, which can be useful if you decided to hide the window as well on the system.

I was surprised on how quickly all those windows were hidden after pressing the shortcut. It should be noted that sound does not stop playing when hiding the windows which means that listening to Internet Radio for instance can still reveal that something is not right.

The software Plancoin itself is not visible in the taskbar or system tray after you press the 'hide this dialog' button.

Update: Please note that the program does not work under a 64-bit version of Windows 7. It can be that it won't work on a 64-bit operating system, or that it is not compatible with newer versions of Windows.

Previous Post: « Customize the Open and Save Window
Next Post: « One Hotkey Software to rule them all