Speed up all Source Engine Games

Source Engine games like Half-life 2, Team Fortress 2, Counter Strike Source and others are based on Valve Software's game engine of the same name. Those games, or better part of those games, can get internally defragmented and can't be optimized using a software that defragments Windows hard drives. It is therefore a good idea to defragment those games regularly to speed them up.

You need a software called GCFScape to do this. It's just a small application that requires the Windows .net Framework 2 to run. Run GFCScape after installing it and click on File > Open in the menu. Navigate to your steamapps folder on your hardrive and select one of the files in the list.

All games benefit from defragmenting files starting with source 2007 while defragmenting the files named like the games benefit only those games. The reason for this is that Source games share libraries with each other, but also make use of individual game files for obvious reasons. GFCScape will load the file and display information about its contents. Click on View > Columns to add the Fragmentation column to the menu. 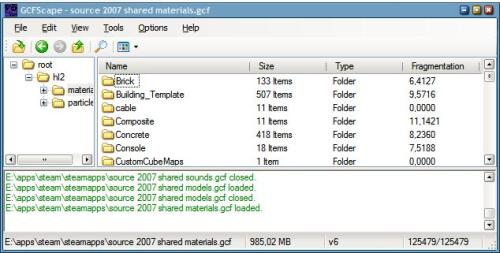 Every value greater than 0,0 means that the file is fragmented and will benefit from defragmentation. To be able to defragment the files you need to enable Write Access which can be done in Options > Write Access.

I had to load a new file afterwards to be able to defragment it. To start the defragmentation of the files click on Tools > Defragment. This should only take a matter of seconds and display the fragmentation score of 0,0 after loading the game again.

This way you are able to fragment games like Counter Strike Source, Half-life 2 and Team Fortress 2 which most likely will result in a speed up in loading times.