I'm a big fan of flying and everything related to it and I'm excited about the job of all air traffic controllers. Among excellent knowledge of English language, this kind of work requires perfect concentration on anything that the controller does or says.

There are many stations on the Internet that let you listen to voice navigation from different airports around the world almost in real-time, with just a small delay. However, at least one of these sites stands out of the crowd by providing a real-time visual summary of the current situation in the air above the Atlanta airport, along with controller's speech.

ATC Monitor displays a picture similar to what the controllers can see on their monitors. Next to each air-plane you can see it's call sign and additional information about it's current altitude, speed, heading and so on. A little arrow near the aircraft indicates whether it's climbing or descending.

The animation is being periodically refreshed so that you can watch how the air-planes move around the airport and react to controller's instructions. It's a good idea to open the screen showing traffic in a new window and watch it in full screen. Concerning the voice commands as well as traffic display, you can choose from two slightly different locations to watch and listen to - Atlanta tower and Atlanta TRACON (Terminal Radar Approach Control). 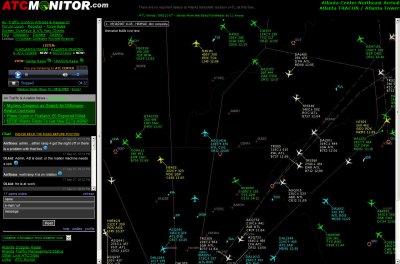 You can also use the shout-board to communicate with other people who are currently watching it or site's forum to ask questions about aviation in general. Large glossary explains specific aviation terms and shortcuts and small gallery let's you take a look at the real runways and towers on Atlanta airport.