Userbars can be used to display custom messages in signatures that are displayed in forums and other places. The difficulty is creating those userbars which normally requires knowledge of image manipulation applications such as Adobe Photoshop or Gimp. There are several software programs that take that burden from you and make it quite easy to create userbars with a few simple clicks of the mouse.

Userbar Generator is one of those programs that lets you quickly create a new userbar. All you need to do is to select the two colors that you want the signature to use, and add a text to it. It is possible to add an image as well and play around with several other settings such as transparency and borders.

Last but not least it is possible to change the width and height of the userbar that is created. The resulting userbars are really nice looking. If you want to createÂ  userbar you should definitely take a look. 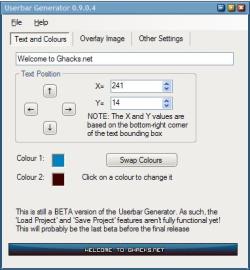 The program works fine even on newer versions of the Microsoft Windows operating system. I have tested it on a 64-bit version of Windows 7 and it worked exactly as it was supported to do.

What I have forgot to mention in the initial review was that you get a preview of your creation right in the program window. That's great for checking it out before you save it to your system.

There are a couple of other things I'd like to point out. You can move the text position around on the bar which is great if you want it centered for instance or starting on the left side and not the right. There is also an option to change the opacity of a couple of elements including the border effect.