Do you love both episodes of the Max Payne game ? Did you also enjoy playing old Sierra classic adventures such as Gabriel Knight 2 and Phantasmagoria which can be best described as interactive movies ? You will enjoy playing Fate by Numbers if you answered both questions with yes.

Fate by Numbers is a Sci-Fi noir FMV adventure game which uses exactly the same technique that Sierra used in their cinematic adventures. You play the role of Alice Sanger, a private detective, who recently got an assignment from an anonymous client to retrieve a briefcase.

A sniper shoots her during the retrieval mission and she now decides to find out more about the motive and background of the assignment. 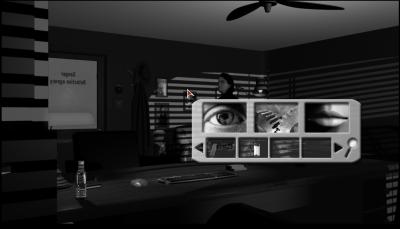 Several movie clips narrate the story up to this point. It looks extremely well done for a non commercial project. Voice and movie playback however seem to be a bit out of sync. This could be a problem of my computer though.

The game interface looks like the one on the screenshot above. When you click on an item on the screen the menu pops up giving you options to manipulate the object. It takes some time to get used to this interface though.

Fate by Numbers runs on Windows XP and Vista and has a huge size of 1.2 Gigabytes. Downloads are only available using bittorrent.

Alice Sanger is a private detective in a futuristic metropolis. She started out her career in the police force, but got fired after the tried to expose corruption within the bureau. As a result, her marriage went downhill, her ex-colleague and soon to be ex-husnband joined one of the more powerful commercial armies of her city.

Take a look at the trailer for more information.

Update: A full and small version of the game is available for download using the Bittorrent protocol or direct download hosted on the third party site GamersHell.