I remember when the Hero Quest boardgame came out. We, some friends and I, immediately grabbed a copy of the game and began to play it several weekends in a row creating our own adventures after a while.

The editor lets you create your own adventures which you can in turn publish so that other players can play them and give you feedback. The game lets you typically choose between one and four characters each with their distinctive strengths and weaknesses.

The barbarian for instance is great on offense but a little bit slow when it comes to thinking while the elf is a fast lad and the wizard a man of the mind. A dwarf with good defense is the last character.

Depending on the game that you choose you play either with only one character which increases the difficulty of the game a lot or with up to four characters which is pure fun if you play the game with a few friends in hot seat mode. 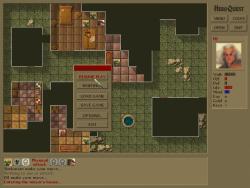 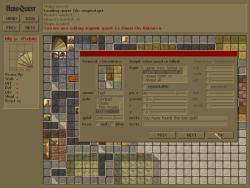 The levels are tile based and every character has a Walk feat that determines the amount of tiles that he can walk per turn. The fog of war reveals only those parts of the map that the character is able to see which means that you never know what awaits around the next corner or behind a door.

Characters have a life setting which gets reduced by many means. Enemies successfully attack, you walk into traps or open poisoned chests. Potions replenish life again, they can be found in chests and barrels or bought from the merchant who charges money for them.

You should probably read the manual first before you start playing because it can be quite frustrating to die during the first rounds. If you do play a lot of turn based computer games you should be fine to hop right into the action though.