Microsoft integrated a basic benchmark into Windows Vista called the Windows Experience Rating which benchmarks key hardware of the computer system to compute an overall score in the end. The Experience Rating is derived from five subscores which are: Processor, Memory, Graphics, Gaming Graphics and Primary Hard Drive.

All five devices are benchmarked by Vista, and a score between 1.0 and 5.9 is assigned to each device after the benchmark. All five scores are used to compute the base score of the system. What's interesting is that Microsoft made the decision to use the lowest score as the base score which does not reflect the overall performance of the PC that well. Then again, it is just a basic benchmark and nothing to fancy either.

If you want to show of your Windows Experience Rating in Windows Vista but have a rather weak score you should consider tweaking the results to get a better score displayed at the end.Â  While this does not impact your computer's performance at all, it at least displays different benchmark scores and base scores in the end.

System Point is a free program for Windows Vista operated systems that you can use to select scores individually. Just run the program and change each score to a value that you would like it to show. 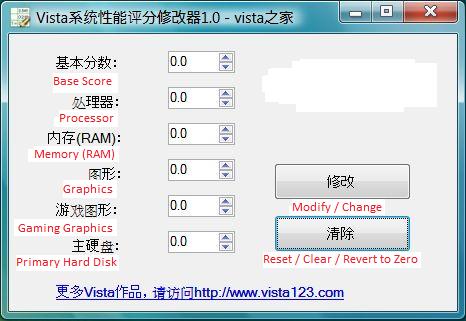 It is possible to change the Windows Experience rating and all five sub scores with System Point which means that you should not rely on that score if someone sells you an used computer running Windows Vista. It's great for fooling friends though. If you are buying a used PC with Vista or newer version of Windows, it is recommended to run the benchmark again before you purchase it just to make sure you are on the safe side of things and the data has not been tampered with.

Microsoft will add higher scores every 12-18 months to reflect changes in the hardware market. There won't be a system that currently gets a score higher than 5.9 unless you tweak it with System Point.

Here you can see the current rating and refresh the rating. The latter can be useful if you have added new hardware to the system that impacts the overall performance.