It is Friday again and as usual I'm reviewing aÂ  great game for the weekend that will keep you occupied for hours or even days. This time it is another Tower Defense type of game. These games have become extremely popular in the online world and we will most likely see a lot of those games in the next months.

Vector TD is one of the better Tower Defense game. Your objective is to destroy the enemy vectors before they can reach the exit of the level. You lose one life for every vector that reaches the exit. The game ends when you have no lives left or when you beat all the levels of the game.

One remarkable aspect of this game is that it has its maps categorized in beginner, normal and extreme maps. The beginner maps for instance have only one entrance and exit to the level while the extreme ones have two of them. The extreme ones are also more straightforward meaning that you have less space to place your towers well.

You may build four kinds of towers that have all their distinctive strengths and weaknesses. Every tower is strong against a single color and weak against another color making it extremely important to have a solid mix of all kinds of towers at your disposal. 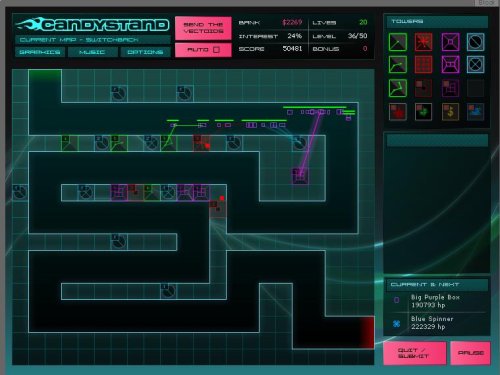 The green, red and violet towers can be build in three different versions while the blue one has only two different models available. Each of the 11 towers that can be build can be upgraded as well to increase range and damage output.

I got to level 50 of 50 in the first beginner map in my first try and will give the normal maps a go later today. This is really a great time waster. The only annoying thing is the commercial before the actual game.

The game is quite challenging on harder difficulty levels and you need to take advantage of each level's structure to succeed in the game.