Grooveshark is a new social music website that is currently in closed alpha stage. I was able to get an invitation to the system and would like to write about it here on Ghacks and also give out some invites to Grooveshark to a handful of lucky readers.

Grooveshark works basically the following way. You start an application on your computer and decide which music folders you want to share with the community. This application has to be running in the background so that you canÂ  share and listen to the music on the Grooveshark website.

The website is where all the action takes place. You are free to search for songs and albums, add users to your friend list, rate songs, play songs from users that are currently online, create playlists and also download songs from other users. Since Grooveshark is currently in alpha stage not all features have been implemented.

Features like editing song tags and the complete system that will reward users with credits (commissions) for uploading songs to other users have not been fully implemented yet. Contributions such as song identification, verifying ID3 tags, moderating, reviewing and recommending music will be rewarded with higher ranks that result in more exposure to the community and thus receive more download requests. 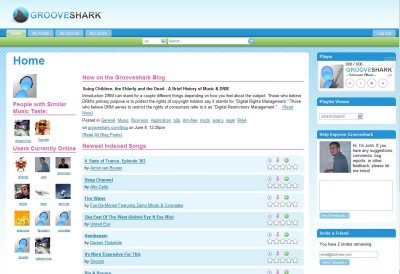 I can't really say that much about the downloading system because I have no credits at this time. Song playback is working fine though although there is the occasional hiccup during page loading time (the developers are working on this at the moment).

About the invites. I was able to get ten additional invites for Grooveshark. Six of the invitesÂ  are reserved for the Chinese, Spanish and German sites at Ghacks while four will be given out here. Just reply with a comment and I will randomly select the four lucky ones. Regular readers will be given a higher chance of winning the invites.

I would also like to point out that it would be nice if users who won the invites will invite more users that have commented in this thread. Please add this in the comments if you intent to do that.

Update: Grooveshark is limiting access to users from specific countries. The service is still available for free though if it is still available in your country. It is now no longer necessary to share files to listen to them on the site.