I have been trying several newsreaders for the Usenet until I finally found the one and only newsreader Newsbin. I purchased it years ago and can only recommend it to all users who are serious about the Usenet. I do know however that some users prefer free software and that is why I took a look at the Pan newsreader which is available for Windows, Mac and Unix.

Pan Newsreader is offering a lot of features that commercial Usenet readers such as Newsbin are offering as well. It does support the downloading of binaries of course, single-click encoding, multiple connections and simultaneous downloads and image previews of downloaded images.

I have to admit that Newsbin is not the perfect newsreader for reading and writing news. Pan seems to be able to handle this task better which is definitely a good thing. It does however lack a few essential features that I do not want to miss. The most important feature in my opinion is the SSL encryption.

As far as I can tell Pan does not offer SSL encryption which is a feature that I do not want to miss anymore. I'm not sure about nzb support but I could not get it to work either. 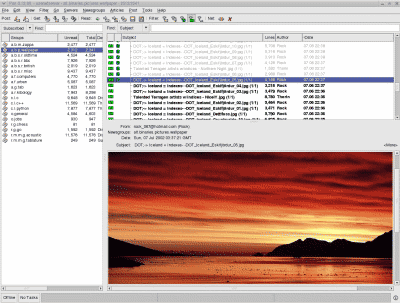 This leads to the following question. Which newsreader are you using?

Update: Pan newsreader has been improved over the years and the developers have added features to it that it lacked previously. Pan supports TSL 1.0 now which means that the one thing that Ã found lacking back in 2007 is now integrated (the encryption of your connection to the news server). The latest version supports a variety of other features, including the automatic grouping of multi-part articles, filtering of groups by regular expressions, support for multiple servers and connection limits, as well as offline reading.

It appears however that Pan is currently only available for Linux and Windows, and no more for Apple Macintosh systems. From the looks of it, Pan Newsreader is more of a communication tool for Usenet groups than it is a program that you can use to efficiently download binary files from the Usenet.

If you are looking for a full-blown client for the Usenet, then you may want to check out Pan Newsreader. It is ideal for reading and replying to news group discussions, but also supports all the downloading features you would expect it to support.