Online Music Recorder is a web service brought to you by the team that has created the Online TV Recorder web application. The music service basically records songs from Internet radio stations for you which you can download once they are available. Due to legal concerns you can only download songs that have been recorded since you joined the service and actively stated that you want them to record songs for you.

This means that you create a large library of songs over time. Hundreds of songs are added daily to the list of recorded songs which are kept for an infinite amount of time. The music that you download from Online Music Recorder is encrypted and you need a special software that decrypts the music using your username and password that you use when you sign into the website.

You do find a wide variety of songs and genres listed to you,  and may filter songs by genre to view only the songs of a music genre that you like. Downloads from the server are fine. I was able to download songs with a speed of about 300K. 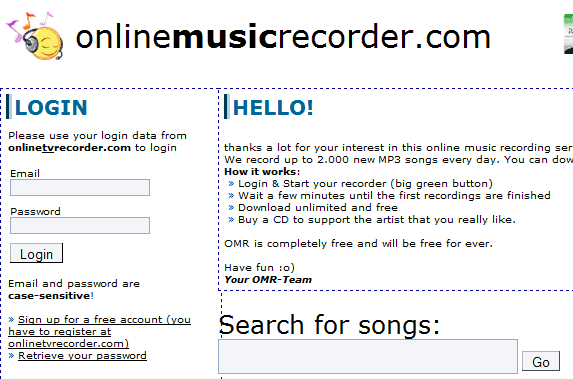 Once the songs are on your hard drive you have to start the decoder and either decrypt one song at a time or a folder with a lot of songs at once. I suggest to use the latter method because it means that you save a lot of time. Encrypting songs takes only a few seconds.

The Online Music Recorder is a great way to download music legally. It has some limitations though. First, you can only download what they record which might not really be what you are looking for. Then it is inferior to recording internet music streams by yourself using tools such as streamripper or xmplay to save them at once to your hard drive.

I personally like the idea and it is a great way to download music especially for novice users.

The service currently records about 2000 songs daily, and the main page offers a selection of songs and artists that are popular. Downloads seem to be unlimited and there is no charge whatsoever to the service.

Note that while the service may be completely legal in its country of origin, it may not be legal in your country.