Games for the Weekend Online Boardgames

I grew up playing boardgames like Risk, Monopoly and Trivial Pursuit and witnessed that board games evolved almost as much as computer games did. I would like to introduce you to one of my favorite online boardgames websites where you can play about 50 excellent boardgames online. Boardgames include Settlers of Catan, Carcassone and Thurn and Taxis. All boardgames of the year and of course playable in multiplayer.

You find players from all over the world playing those games on the website which supports several languages such as German, English, Spanish and French. The main chat language is German since this is a German website but most users are really helpful and speak English as well. It is not a problem to find English games though. Each game that can be played offers an extensive game manual in your language in case you do not know how to play the game. It is a good idea to read the manual before you start to play the game for the first time.

The first thing that you need to do is create a free account to log in to the website. Once that is done you click on Play now to see available games that are looking for players on the left side and all games that can be played on the right side of the screen.

Double-clicking a game brings you to the game screen which either lets you join the game or spectate to learn more about it before you start playing it by yourself. 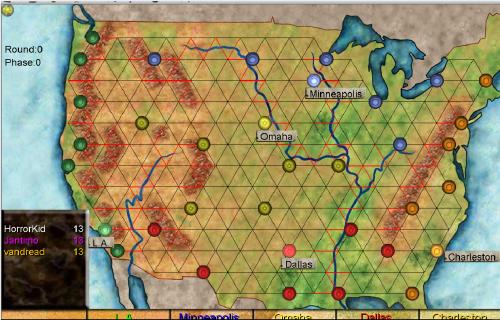 The screenshot above shows a typical game interface. The game Transamerica is played here with four players. You could very well spend your whole life playing boardgames on the Brettspielwelt (boardgame world) website without problems. I normally play there when I'm either sick or want to play a game once again but have not enough human players to play it without the computer.

Note: You need Java to use the website as all games and the site's functionality is requiring it.

The selection of games is pretty good if you like so called Eurogames. Next to the games mentioned, you also get access to other popular games such as Puerto Rico, Trans America or Caylus.

If you like to play board games and do not mind to play them online against friends or strangers, then you won't find a better place on the Internet than this website. While it does not beat playing games with friends locally, it comes very close to that, especially if you do play with friends online.