I was always a math freak in school and preferred math over most other classes such as English or Geography. I was especially proud of my mental arithmetic skills at that time and I can say that I'm still proud of them after playing around with Math Ninja for a while.

The author of Math Ninja wrote it for his 8-year old son and his math skill improved in a couple of days of using the math software. The objective of the math game is to answer as many questions correctly as possible. You can define in the setup which mathematical operators should be included (Addition, Subtraction, Divisions, Multiplications and Negative Numbers) and select a difficulty level.

Lower difficulty levels remove the more complex operations such as multiplications and divisions from the pool of possible math questions making it an ideal program for children of all ages. (almost). The first difficulty levels ask less questions and easier questions. Level 1 for instance is only about addition of small numbers between 0-9. 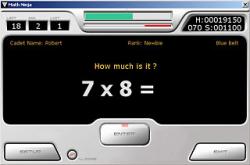 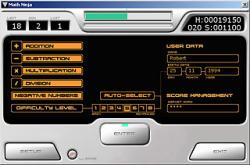 Players get rewarded with points and ninja ranks to motivate them further. I think Math Ninja is a great way to improve the math skill of your children over time in a playful environment.

The latest version of the program supports both negative and positive numbers. You have got only ten seconds to enter the result of the equation. There is unfortunately no option to change the time limit. Especially younger children may have problems because of this.

The program displays some basic ninja animations on the screen which add to the fun of the program.

Previous Post: « Use one mouse and keyboard on multiple computers
Next Post: « Create visible copyright notices for images