I do like futuristic looking demonstrations of technologies that will play a big role in the coming years. One demonstration that I found absolutely fascinating is a Photoshop multi-touch image editing demo.

Working with small screens and a mouse plus keyboard is the current state of the art when it comes to image editing.Sure, there are options to add pen input to that but that is about it.It becomes problematic in a number of way including working in a team.

It is also not natural to use a mouse to draw and edit images. Multitouch image editing uses a natural flow and offers a bigger detailed view of the image at hand.

The technique may not be suitable for fine-tuned granular work that you sometimes have to do in Photoshop, but it certainly can become an alternative for operations that do not require this.

You can for instance use it to browse images in a natural flow, do resizing operations, mark areas that you want to cut or copy, or perform other modifications that affect the whole image you are working with or a large enough part of it. 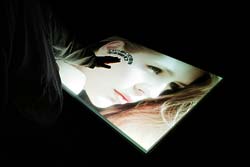 I found a video on YouTube demonstration how powerful this way of image editing is. Enjoy the show. It is clear from what is being demonstrated that the technology is not there yet completely. You clearly see the input lag of the touch commands in the video.

Adobe recently has released Adobe Photoshop Touch, a version of Photoshop for Apple's iPad or Google Android tablet devices that support touch input. While it does not come close to what is shown in the video demonstration, it highlights that touch input may become the next big thing in image editing.

Tablet devices are on the rise and a larger user base may certainly give companies enough incentives to produce specialized touch-based versions of their programs for touch-devices.