Naac reminds me a little bit of Smash TV. It is a pretty straightforward top down shooter - or arena shooter if you will - that can be downloaded from the developers homepage.

You start with a handgun and have to defeat all aliens that emerge from different sides of the screen.

The game would be incredibly boring if it would not feature power ups, better weapons, different types of aliens and even boss aliens that require strategy to defeat.

It is absolutely crucial that you pick up the power ups and better weapons when they appear randomly on the screen as you cannot possible defeat all the alien hordes with the hand gun that you begin the game with.

The better weapons do not appear immediately. It takes about 2-3 waves of aliens before you get the real good guns like the rocket launcher. You control the game with the wasd keys and the mouse.

The mouse is used to aim at the enemies and shoot at them. Left click fires a bullet in the direction that you aim and the right-click changes the type of weapon that you use at the moment. What else can I say? Naac combines a fast game play with addicting game elements. Ideal for a quick snack during a break. 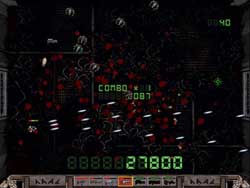 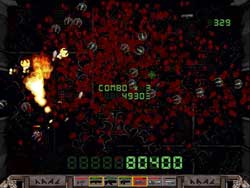 Please note that NaaC is not short on violence and that it is not a suitable game for children. In the game it all boils down to survival for as long as possible, and that's best achieved by picking up better weapons and power ups that help you survive wave after wave of alien onslaught.

It is a short game on the other hand, not featuring a campaign, scenarios or multi-player which I imagine would add lots of fun and re-playability to it. Still, if you are looking for a fast paced arena shooter then this one is definitely something that you want to try out.

Update: The developer website is no longer available. We have uploaded the latest version of the game to our own download server. Please note that we don't support the game in any way, and have uploaded it for archiving purposes. You can download Naac with a click on the following link: NaaC