Practical Tips to Decrease the Temperature of your Computer - gHacks Tech News
ghacks.net

Practical Tips to Decrease the Temperature of your Computer

One phenomenon can be observed every year when the warm summer period begins, or year round in regions where the thermometer never drops below 25 or so degrees Celsius. People notice that their PC systems start to reboot automatically, or stop working altogether after they have worked with the system for some time.

If you have experienced this in the past, you may already know what is causing this behavior. PC components such as hard drives, the cpu or video cards may overheat because of the temperature increase as the surrounding air gets warmer as well and air cooling becomes less effective as a consequence.

You can do a few things to check the temperatures of your PC components, some automated, so that you receive warning notifications in advance before temperatures reach critical degrees.

Speedfan is one of that programs that does exactly this. It checks all temperature sensors so that you get processor and hard drive readings right in the application interface, provided that your system supports that. The program can also manage system fans so that you can slow them down to reduce the noise, or increase their rotation speed to improve the cooling.

The motherboard needs to support this feature of course, but most modern boards should. Lets say all fans are working 100% and your components are still getting to hot. You could start by checking the airflow in your case. Where is the fresh cool air coming in, where is the warm air going out. Are all components in the flow or is one bypassed by the flow? 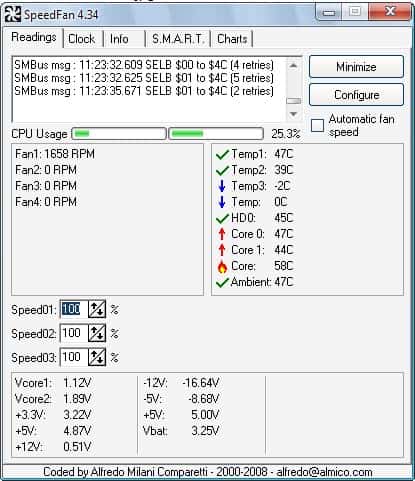 The airflow may be blocked by cables or other components in the tower, so make sure you get some cable binders to move cables out of the way. Also, remove any cable from the tower that is not needed.

If you are using a standard CPU cooler you may want to consider buying a more powerful cooler to replace it. A new cooler may drop the cpu temperature by ten or more degrees easily.

If you need your computer to work right away but it does not, you may want to try the following: take a regular fan and point it directly to your PC. Open one side of the case of the PC so that the fan is blowing straight at it. While this is not a solution for all eternity, it may get you through the day without further issues.

You could also check the fans and clean them. Especially useful if you are a smoker or never cleaned them before. Remove dust from them which also blocks their effectiveness.

Do you have additional tips that keep your computer from overheating? Let me know.