I love game remakes, especially when they are fan made and not a company's effort to make easy money with a well known franchise.

I never played the original King's Quest series (was more into Leisure Suit Larry at that time) but enjoyed the remakes that have been released so far. If you did not know, there are also remakes of King's Quest 1 and King's Quest 2 available at the ADG Interactive website (free of course).

King's Quest is a classic point and click adventure game with beautiful graphics and a compelling story that will suck you in right away.Â  It is recommended to play the first two parts of King's Quest before you start with this one as it is a follow up.

While you can play it without knowing anything about the original games, you will encounter characters that play a role in all parts of the game franchise, like the main character Graham.

I can't say much about the story, the following excerpt was taken from Wikipedia:

In King's Quest III, the story moves away from Daventry and King Graham to the land of Llewdor, where a boy named Gwydion is being kept by the wicked magician Manannan. Gwydion was kidnapped from Daventry by the magician when he was young, and this adventure tells the story of his journey back to Daventry.

Since the story builds on what happened in King's Quest I and II, here is a short summary of what happens in those two earlier parts of the franchise:

Update: The original King's Quest III Remake has last been updated in 2006, when the developers of the game released version 2.0 and a voicepack for the game. The original website is no longer available and so is the game. 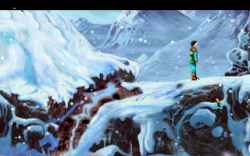 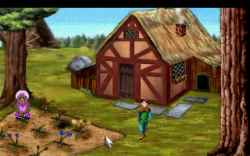 Here is a play-trough video that has been uploaded to YouTube. Make sure you only watch it if you do not mind spoilers.

The game is currently only available in English, but the developers have promised to release a language pack in the future that is adding language translations to the game.