Dial-a-fix is a collection of 'known fixes' that have been compiled over the past year that really knock out some serious Windows problems, all with one or two clicks.

It tackles issues that you may have with SSL/Cryptography, Windows Update, Microsoft Installer, and many miscellaneous shell problems. Most of the fixes it offers are found on various Microsoft Knowledgebase articles, and articles written by Microsoft MVPs. When you see a list of DLLs that need to be registered using REGSVR32.EXE, chances are they are already listed in Dial-a-fix. Mouseover a checkbox or button to obtain more information about what will be executed, or what DLLs will be registered.

The program works similar to Microsoft's Fix It, only that the series of tools that Microsoft produces in recent time has not been available when Dial A Fix was released. Fix Its are also easier to handle as they troubleshoot and repair the system more or less automatically. 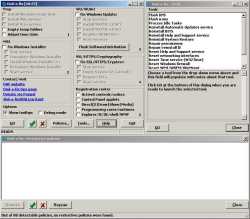 It needs to be noted that the program is only working under Windows XP or earlier versions of the Microsoft Windows operating system, and not when you run Windows Vista or later systems. This is also true for Windows Server, where only Server 2003 and earlier systems are supported by it.

A viable alternative is Microsoft's own Fix-It applications. These small portable programs fix common Windows issue that many Windows users face with a few simple clicks of the mouse button.

Windows users who want a broader approach may find the Fix It Center application helpful. The software basically analyzes the operating system for known issues, and proposes to repair them by running Fix-Its on the system. The application is useful for users who know that something is wrong, but cannot pinpoint the exact problem to a component or application.