Screamer Radio is an all in one Internet radio tool that you can use tp listen to and record audio streams of your favorite Internet radio stations. It's highly configurable and works with Shoutcast and Icecast mp3 streams, Icecasts ogg vorbis streams and even windows media audio streaming. Works great, is free, what more do you want?

The Screamer Radio application is available as a portable version and installer. The portable version is excellent if you do not want to install the program on your computer, or if you want to carry it around on an USB drive or stick, to have access to your radio stations from any Windows computer you are working on.

The latest version of Screamer Radio, released in March 2011, has not changed that much from the first version introduced back in 2006. The developers have fixed many bugs that plagued some users, for instance long path bug when recording music. Core components of the program have been updated in recent time, including BASS and lame_enc.dll. 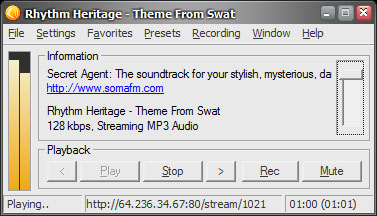 When you start Screamer Radio, your first might want to check up on the settings and preferences to make sure that everything is configured correctly. Here you can change the download directory for music that you record, stream bufferingÂ  values and reconnection settings, as well as layout and appearance settings.

You find the radio stations that ship with Screamer Radio under Presets. They are sorted into genres such as Jazz and Blues, Classic Rock or Popular Music, and you can start playing a channel by simply selecting it from that listing.

It needs to be noted that Screamer Radio can only record one radio station at a time, and that's the station that is playing in the program. I suggest you give StreamWriter a swirl if you want to record multiple stations at a time, or listen to one station while recording another.

Screamer Radio is a handy easy to use program that is ideal for users who want to listen to Internet radio and record the station that is playing at the same time.