Microsoft is reportedly prepping to introduce an Experimental Features section in the Settings app. These options could be introduced in the Windows Insider Program, and may allow users to enable new options manually. 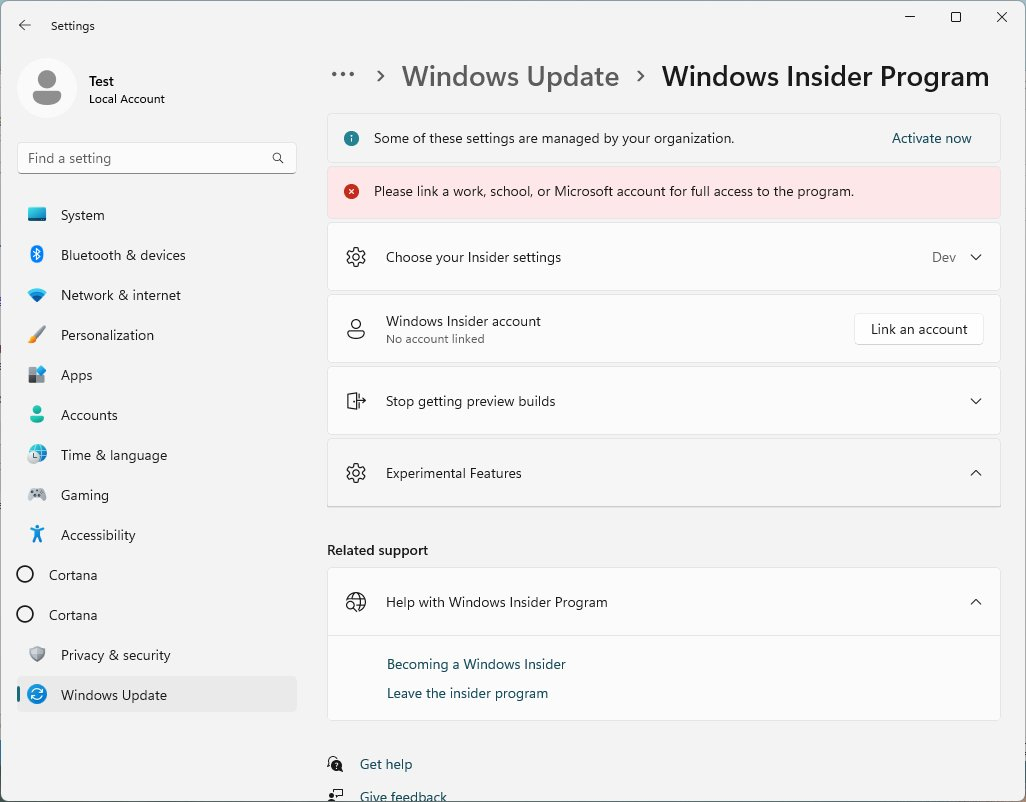 Microsoft announced last year that it would be trying out experimental features in the Windows 11 Insider Program, and that some of these changes may not make it to general availability. We have seen plenty of new options being introduced in the test builds.

So, why would Microsoft bring an Experimental Features section with toggles? It is quite simple really, most participants in the Insider Program are eager to test the new features that are introduced in the latest builds.

The problem with this is that most new features are not always available for everyone. A good example would be Tabs in File Explorer, it was a change that got users excited, but unfortunately was not enabled for all users. That's because Microsoft, like many software companies, tests these experimental features on an A/B basis, i.e. it rolls out the modifications, new features to a limited number of people. A more recent example would be the rounded Search box on the Taskbar, even though Microsoft has been testing it for a couple of months, very few people have actually gained access to the feature.

The idea is to get some feedback from the testers, and analyze the data. If users' opinions are positive, then the feature is rolled out to more users. On the other hand, changes that receive backlash from users are reverted, sometimes temporarily as the company works on ironing out the bugs or rethink the design, before reintroducing it.

Once a feature gains traction, it is rolled out en masse. Now, this also poses a problem for users. They may have to wait for weeks or months on end, before they get access to the new options, and not everyone has the patience for this. As a workaround for this annoyance, people resort to using a third-party utility called ViveTool, to enable the experimental features.

This in turn causes a hurdle for Microsoft, as it may not receive feedback from users who have enabled the features, after all they were not the intended audience. But that hasn't stopped users from using the tool. And when users complain that the feature doesn't work for them, it becomes difficult to debug the issue. For example, geo-restricted features such as Suggested Actions which only recognizes U.S. based phone numbers. This feature may not detect numbers outside of America, and users may think that it is broken. That's probably because it is a work-in-progress option, that was not meant to be tested in other regions.

Windows 11's Settings could get an Experimental Features section

Microsoft seems to have finally realized that it cannot stop users from enabling Experimental Features, and that is very likely the reason why it is maybe introducing the new section in the Settings app. This way, the needs of both the developers and users can be satisfied, to some extent.

A screenshot that was shared by Albacore (@thebookisclosed) on Twitter, shows the Experimental Features section under the Windows Update Tab in the Settings app. The leaker, who is actually the developer behind ViveTool, states that the list is empty as of now. So, it is just a placeholder at the moment.  Another notable tipster, PhantomOcean3 (PhantomOfEarth), replied to the tweet, indicating that a new velocity feature labeled "AllowExperimentalFeatures" was discovered in recent Dev Channel builds.

On a side note, this could prove to be beneficial for users in a couple of ways. For one, they will not need to rely on third-party tools, reliable as they may be. People don't need to look up the velocity codes for the features that they want to try, or even learn the commands to enable them manually. This might actually make things a bit easier for Microsoft's developers too, as they could gather data on a grander scale, either from telemetry, or actual feedback from users.

Now, it is only a matter of time before the Experimental Features Settings are formally introduced in the Insider Program. Let's hope that Microsoft doesn't troll us by rolling it on an A/B basis, that would be quite hilarious, though.

As someone who tests Dev Channel builds on a regular basis, I'm quite happy to see the Experimental Features section.

Volume Mixer is coming to Windows 11's Quick Settings Panel, here's how to try it