The European Union is working on new laws that could enforce OEMs to offer long-term software support for phones. A draft of the proposed requirements can be found on the EU's website. 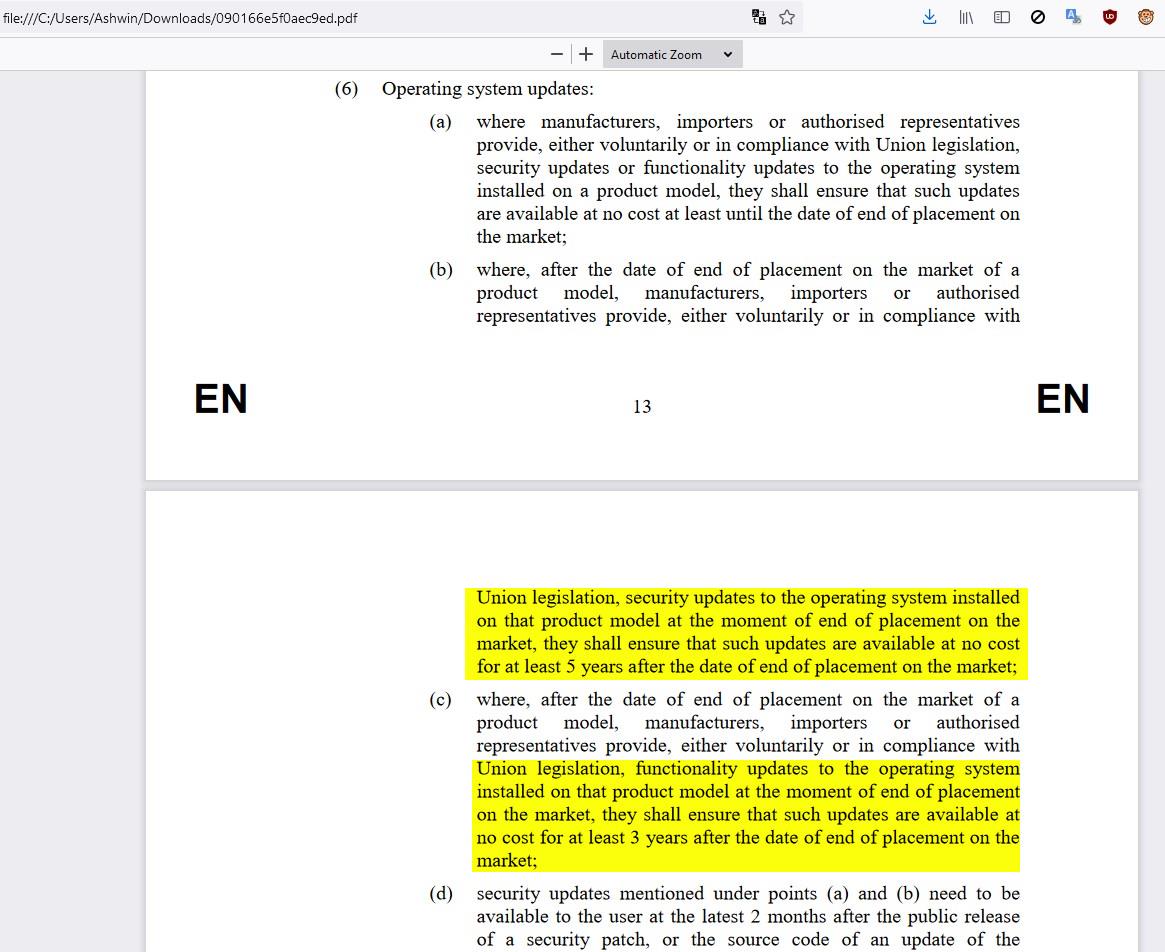 The new rule will require phone manufactures to deliver 3 years of operating system updates (functionality updates) and 5 years of security updates. They will need to provide security updates within 2 months after the public release of a security patch.

The draft for the law states that a software update should not result in the deterioration of the battery's capacity, i.e. it should not be lesser than what it was rated for in the standard tests. If the user chooses to reject an update, the performance of the device should remain unaffected. The proposed requirements also ask manufacturer's should provide spare parts for cameras, batteries, displays, etc., for at least 5 years, to make the phones easily repairable.

The draft points out that many people abandon their devices prematurely, and that the phones are not recycled. In order to reduce such e-waste, the EU says that phone batteries need to be at least 83 % of the rated capacity even after 500 full charge cycles.

The EU has also told phone manufacturers to use USB Type-C as the universal charging port on their devices, which means Apple's iPhone will have to comply with the rule. The European Union has passed another law, the Digital Markets Act, that could enforce Apple to allow installation of iOS apps from third-party sources.

Apple updates its iPhones for several years, the iPhone 7 for example, received 5 years of OS updates (from iOS 10 in 2016 to iOS 15 in 2021), and continues to receive security updates to this day.

Android, on the other hand, is a mess. Many OEMs choose to add their own custom skin over AOSP, often fine-tuning the operating system with useful features. However, this usually comes at a cost, in terms of performance and sometimes the user's privacy (ads, trackers, etc.)  Android phones have evolved over the years in terms of hardware, they have better screens, faster storage, processors, optical sensors (cameras), etc. But when it comes to software updates, the situation is quite laughable. Hundreds and thousands of new Android phones are announced every year, but a very small percentage of these receive proper OS updates.

The rest of the OEMs treat their devices in an unorthodox fashion, with a few companies opting to support their phones for a year or two before abandoning them, while some manufacturers only provide security updates for their phones.

This is, in my opinion, the problem. Google owns Android, and it needs to set a better example by extending software support for its devices for as long as possible. It has a finite number of devices, like Apple and its iPhones. And since it has started implementing custom chipsets, i.e. Google Tensor, on its Pixel phones, surely it can do better than just three years of OS updates.

There are other factors that affect a manufacturer's ability to update an Android OS version. Normally, OEMs provide OS updates for up to 3 years since the launch of a chip. Every time Google releases a major version of Android, OEMs have to update the framework to make their chipsets support the new OS and APIs. This includes drivers required to run the software, without which a phone will become unusable. If you're interested in the technical details, I recommend reading Mishaal Rahman's write-up about Google Requirements Freeze.

Imagine if Intel and AMD didn't provide driver updates when new versions of Windows were released, many computers won't be able to run the OS, and hence can't be updated. The Android situation is sort of similar. But then, how are custom ROM developers able to release OS updates when OEMs cannot? They update the kernel source code in order to use the drivers from older operating systems or drivers from other devices with the same chipset, to make them function with newer versions.

I've been using Android phones for about 12 years. I always make it a point to unlock my mobile's bootloader and flash a custom ROM for the best experience, at least in terms of OS updates and to get rid of bloatware. But, that's a hack isn't it, a workaround, and not everyone is going to be prepared or willing to jump through these hoops. OEMs need to provide a proper solution, which is exactly what EU's new rule could help with.

If EU lawmakers enforce the rule to make OEMs support phones for several years, things could change for the good. But it may have a downside too. If people hold onto to their phones for longer, instead of upgrading to newer models, this will result in fewer units being sold. Fewer sales means less profit, and companies will have to compensate for this differently. They could increase the prices of phones to make it feasible for supporting devices in the long term.

Previous Post: « WhatsApp says it is rolling out end-to-end encrypted backups for Android and iOS users
Next Post: « Pixel perfect Picture? More like a Pixelated Problem with Google Pixel 7 Pro